An opponent of health care legislation being debated in Washington remains an opponent after Senator McCaskill’s Jefferson City forum, but leaves with a favorable impression of the senator. 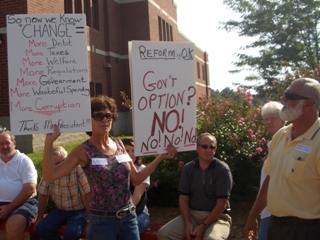 Waiting in line for the doors to open at Lewis and Clark Middle School, Robert Babin of Laurie said he opposed President Obama’s health care initiative.

"Well, we’d like to see reform, there’s no question about it," Babin told the Missourinet prior to the forum. "But we think a government option is the wrong way to go."

Babin and his wife, Victoria, waited patiently to get in, listened attentively during the one hour public forum and praised Senator McCaskill’s handling of the issue.

"I was impressed with what she said, but I’m disappointed that she still supports a government option," Babin told the Missourinet after the forum.

The crowd grew rowdy as times. At times, various members of the audience shouted at the senator. Yet, it didn’t get out of control.

"I’m proud to be an American and I’m proud to have this opportunity," Babin said. "And I’m proud of Senator McCaskill for continuing to hold these while all the other Congressmen are hiding," said Babin.

The Jefferson City forum attracted more people than could fit in the middle school cafeteria. The local fire marshal limited attendance to 400, including media and the Senator’s staff.