The parents of a Virginia man who recently went public with information that he was the victim in a $600,000 pedophile priest cover up case are urging other victims to come forward. 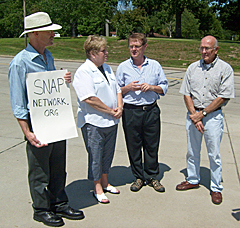 Doctor Mark McAllister came forward to say that he, while a resident of Boonville, was molested by a Father Gerry Howard, who changed his name from Father Carmine Sita after being convicted of criminal activity in New Jersey and ended up in Missouri.

Steve McAllister, the father of the victim, urges others who might have been molested by this priest to report the crimes.

“We strongly would urge any other victims of Howard that have not made their abuse public to do so to the proper authorities,” said Steve McAllister during a sidewalk news conference outside the Jefferson City Diocesan Headquarters.

The McAllister family has been working with David Clohessy, Executive Director of the Survivors Network of those Abused by Priests (SNAP), hoping for more openness from the Catholic Church.

“We are terribly worried that Father Howard may literally be molesting a kid as we speak,” said Clohessy, himself a victim of priest abuse.

Steve McAllister believes the Church was complicit in hiding the priest and his deeds.

“I suspect, and I really have no basis for saying this, but I suspect Gerry Howard was not the only such priest that was moved around in this fashion,” said McAllister.

He would like to see the Catholic Church come clean.

“Looking at the sacrament of confession within the Catholic Church, where us mortals are encouraged to come in and tell our tales of misdeeds and so on to a priest and receive absolution, could, I think, very advisedly, be turned around so that the Church, itself, in these cases, goes to confession.”

That, he says, could be done by having the Catholic Church open up its archives regarding sexual abuse by priests.