The election to succeed outgoing U.S. Senator Christopher "Kit" Bond is more than 14 months away, but battle lines are being drawn and the issues that promise to be so much a part of that campaign are taking shape. Two of the contenders – Republican Congressman Roy Blunt and Democratic Secretary of State Robin Carnahan – have been out greeting people and shaking hands, and did so during the Missouri State Fair in Sedalia. 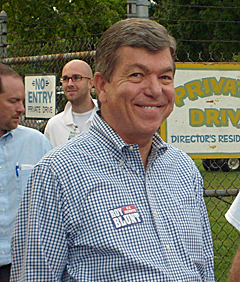 Blunt wants this campaign to focus on the important issues facing Missourians, including health care reform and cap and trade legislation.

"I think this can be and should be a race about issues," said Blunt in an interview with the Missourinet. "Clearly, there are big differences on these issues – not only between (U.S. House Speaker) Nancy Pelosi, (President) Barack Obama and I, but also between Robin Carnahan and I. And I look forward to chances to actually talk with her and be at the same place she is talking about these issues."

Carnahan sees the campaign dealing with a number of issues aimed at making Missourians feel they are being well represented in the Nation’s Capital. 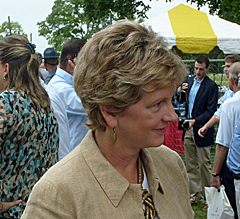 "We’re just going to be talking about how, in Washington, we need folks that are looking out for us, not the special interests," Carnahan told the Missourinet. "I think everybody who watches what’s going in D.C., right now, feels the way I do, and that is that Washington seems to have been taken over by the lobbyists and the special interests."

Carnahan is a big believer in health care reform.

"We’ve been acting like we’ve got our head in the sand for the last ten years on this issue that is really affecting people’s lives. It affects small businesses. The costs are outrageous for the government. So, we’ve got to have some kind of reform that keeps the insurance companies honest, that gets prices of insurance down, and gets folks who need coverage – coverage."

Blunt points out there are several health care reform proposals being discussed on Capitol Hill in Washington, D.C., with greater government involvement a key component of all proposals.

"They’re talking about a two-trillion dollar solution, that we couldn’t afford if it was the best idea in the world," said Blunt. "It turns out it’s not a good idea and the cost is absolutely unbelievable and doesn’t meet any kind of a standard."

Carnahan is the only announced Democrat in the race to succeed Bond. Blunt has a primary opponent in State Senator Chuck Purgason of Caulfield.