Agriculture Secretary Tom Vilsack brought the Obama Administration’s rural tour to Missouri, touting the benefits of the federal economic stimulus act and attempting to reassure farmers they will benefit from changes being proposed in Washington. 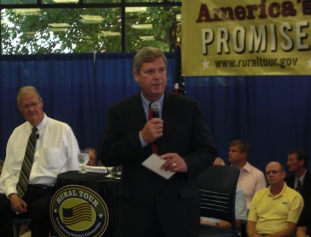 Vilsack said part of the $787 billion dollar economic recovery package paid for more assistance for the 35 million Americans who receive food stamps, so they could buy more at the grocery store.

In June, President Obama announced that Vilsack would lead the Administration’s rural tour. Vilsack told the crowd in Sedalia that he had visited states from New Hampshire to Alaska. He counted his visit to Missouri as his 16th stop on the tour. Vilsack, who is the former governor of Iowa, called it somewhat of a homecoming, because his wife has relatives in Missouri. The stop in Sedalia drew more than 100 people.

Vilsack said the federal economic recovery package sought both to bridge from the tough times to better times, but also sought to address long-neglected infrastructure needs in rural America by financing the construction of roads and bridges.

The agriculture secretary also said the Obama Administration has a plan to revitalize rural America through bringing broad-band Internet access to farm country, steering the country toward alternative energy such as bio-fuels and linking local production to local consumption.

Vilsack acknowledged he faced a tough crowd in trying to convince farmers that climate change legislation would be "a net winner" for farmers.

"Now, I know this is a controversial issue and I know there is a lot of angst about this," Vilsack told the crowd.

Vilsack insisted the country’s capacity to innovate would create opportunities five and ten years from now that cannot be envisioned today. He cited a USDA study that estimated a net economic benefit of $10-20 billion to farm country due to the offsets which are part of the so-called cap and trade legislation.

A speaker at the forum challenged the secretary on the point, stating that there were segments of the agriculture community which will not be able to reap the benefits of the offsets, but will have to cope with the higher cost of energy the legislation will spur.

"I think we’re developing a new paradigm here for rural America, which I think is long overdue," Vilsack responded. "I’m hopeful and optimistic that it will put more money in the pockets of farmers."

Vilsack was introduced by West-Central Missouri Congressman Ike Skelton. He and Skelton earlier toured Show Me Energy Biomass Plant in Centerview prior to driving to Sedalia.

You can get more information about the rural tour, plus updates on the Web at RuralTour.gov or on Twitter at www.twitter.com/RuralTour .