Cattle rustling has been addressed by the General Assembly, but Governor Nixon wants more done to deal with the stealing of cattle and other agriculture crimes. With the Missouri State Fair as a backdrop, Nixon has announced the launching of a new task force to address livestock and farms from theft. 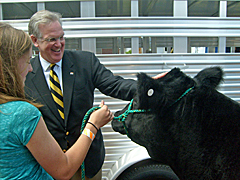 “With the reconstitution and broadening of this task force’s responsibilities all of the state and local agencies and affected agriculture and livestock associations will be able to work collaboratively toward the same goal – eliminating crimes against farms and ranches. And if those crimes do exist finding the perpetrators of them very quickly, very quickly and bringing them to justice,” said Nixon.

“These are clearly people that are stealing cattle in one part of the state and either selling them in another part of the state or even in another state,” said Nixon. “And unless we have a seamless level of cooperation between law enforcement and farmers across the state the county line will be a defense to investigations.”

Since 2006, the State Highway Patrol has recovered $2.1 million in stolen agriculture property and has investigated more than 1,300 leads.