Federal cap and trade legislation, which is designed to cut down on carbon emissions, is the subject of quite a bit of conversation at the Missouri State Fair in Sedalia. Three Republican Congressmen – Roy Blunt, Sam Graves, and Blaine Luetkemeyer – joined Missouri Farm Bureau President Charlie Kruse to criticize the legislation as harmful to agriculture. 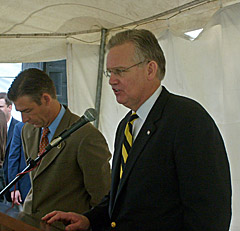 Governor Jay Nixon was asked about it, as well, as he held a news conference following the Governor’s Ham Breakfast. He says Missouri’s interests must be protected.

“We’ll watch what they (Congress) do,” said Nixon. “But Missouri needs to have coal – clean coal the way they’re doing in many parts of this state and this country – to provide the power in the short run and we’ll make sure Missouri’s interests are protected.”

Nixon has not spoke to any Missouri Members of Congress at great length over the issue.

“I’m not the lobbyist for the state, I’m the Governor of the state,” said Nixon. “And the people here – thousands of people here – will have their chance to talk directly to those Members of Congress and we’ll respond accordingly to what they pass.”

Cap and trade legislation has passed the U.S. House but has yet to be acted on in the U.S. Senate.