Former Governor Warren Hearnes is lying in state in the rotunda of a Capitol where he served as State Representative, Secretary of State and Governor for two decades. Hearnes was the first Missouri Governor to serve two consecutive four-year terms. He was Governor from 1965 until 1973.

Hundreds of mourners will pass by his casket before the memorial service at 2 p.m. The Hearnes family and state officials visited the casket just after 10 a.m. Among the first of those offering words of comfort were Governor Jay Nixon and First Lady Georganne Nixon. 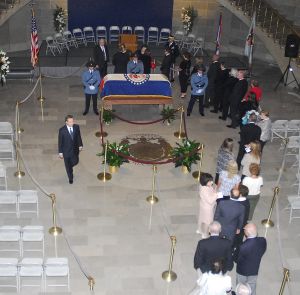 After the service, the hearse carrying the former Governor will circle to the north side of the Capitol for military honors including a 19-gun salute and a helicopter flyover.

Afterward, Hearnes will be returned to Charleston for a visitation tomorrow evening at the First Baptist Church. The funeral will be Friday morning at the church.