State funeral services for former Gov. Warren Hearnes have concluded at the Capitol, with Gov. Nixon praising Hearnes as a governor who provided a steady hand during the stormy times of the 1960s. Hearnes served as Missouri governor from 1965 to 1973. He was the first to serve consecutive terms as governor after the state constitution was changed to allow it. 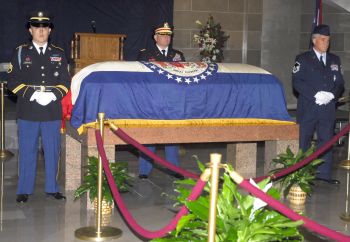 Nixon stated that it was his honor to help commemorate the life and leadership of Missouri’s 46th governor. Nixon noted that Hearnes accomplished much during his time as governor, but also in her personal life, such as marrying his childhood sweetheart Betty. The two were married more than 60 years.

Nixon stated that though many years have passed since Hearnes served as governor, his legacy of compassion, action and enlightened leadership continues and endures.

The casket was closed, covered by a state flag Hearnes took with him to Charleston. He had told his wife, Betty, that he wanted that flag to drape over his coffin.

Hearnes was a member of the Missouri House, where he became the Majority Floor Leader. He was elected Secretary of State prior to winning election as governor. His public service spanned almost 70 years.

After the service, the hearse carrying the former governor circled to the north side of the Capitol for military honors, including a 19-gun salute and helicopter flyover. Hearnes will be returned to Charleston, in southeast Missouri, for a visitation tomorrow evening at the First Baptist Church. His funeral will be held Friday morning at the church.