The Capitol rotunda has been prepared for tomorrow’s state funeral of former Governor Warren Hearnes, who died Sunday. Hearnes was 86. He was the first Governor to serve consecutive four-year terms, serving 1965 to 1973. 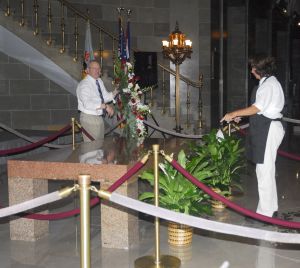 He’ll lie in state at the Capitol until a memorial service begins at 2 p.m.

His casket will rest on a marble catafalque last used for the funeral of Governor Mel Carnahan in 2000.

The Capitol doors open at 7:30 tomorrow morning for mourners wanting to pay their last respects.

Hearnes will be returned to his hometown of Charleston, Mo., after the Capitol service. A visitation is planned for Thursday evening at the First Baptist Church in Charleston. The funeral will be at the church Friday morning.