The Missouri Tigers held their first practice of the fall schedule Saturday morning at Faurot Field.  There were some good things on both sides of the ball, but with just 20 days before the season opener against Illinois, there is plenty to work on.

As I watched the scrimmage, I thought the defensive line play dominated the day.  There was constant pressure on the quarterbacks with seven recorded sacks from the defense.  It was difficult to gauge at times the effectiveness of the quarterback play, because they were under quite a bit of pressure.  Plus, the young quarterbacks like Blaine Dalton, and Ashton Glaser took so many bad snaps from the younger centers that it looked like fire drill back there at times. 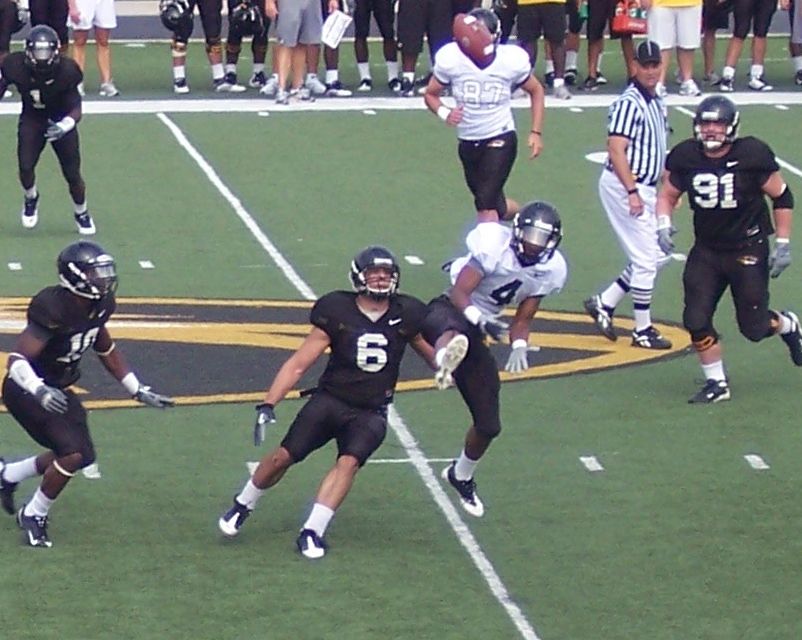 There were no issues with junior Tim Barnes and when Blaine Gabbert and Jimmy Costello had time to throw, they were pretty accurate.  The other issue was holding onto the football.  Jared Perry dropped a couple of passes and had this pass (pictured right) deflected and picked off.

There were several positives.  Gabbert (7 of 22, 219, 1 TD, 1 INT) is clearly head and shoulders above the rest of the quarterbacks.  He still wants to try to force plays and he took a few sackss, but he also showed an ability to scramble rushing for 52 yards.  Danario Alexander (7 catches, 91 yards) had the best hands.  He caught everything that came his way.  I was also impressed with sophomore tight end Beau Brinkley.  He had four catches and one of them was a beautiful one handed grab behind his back.  I thought Jimmy Costello (11 of 24, 103 yards) has really improved.  The sophomore quarterback showed more poise in the pocket and his strength has really improved from his freshmen year.  Blaine Dalton, (16 of 27, 187 yards, 1 INT) who spent time with the team during the spring, has a natural ability to scramble and I wrote down in my notes that I thought he was crafty.  Head coach Gary Pinkel used the word savvy.  Each time I watch Dalton, I’m more and more impressed.

Defensively, I thought the coverage in the secondary was solid.  There were five interceptions.  Some missed tackles at times.  The defensive line is solid, especially on the ends.  Redshirt Freshmen Aldon Smith is going to be a difference maker.  He’s 6’5, 255 and he gets around the outside tackle fast!  He had one tackle for a loss and no sacks, but he disrupted the offense all morning.

Coach Pinkel spoke after practice.  Click on the link below.