The State Fair in Sedalia gives Missouri farmers the chance to showcase their livestock and one 12-year fair veteran thinks he’s got a good shot at taking home a ribbon this year. 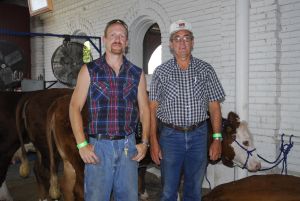 Frank Flaspohler is a cattle farmer in Fayette. He brought six of his prize Registered Polled Herefords to the cattle barns this year. He says he’s competing for the best six head, so he brought two bulls, one cow calf pair and two heifers.

All from the same bull, Prospector MO 15, which he says is a high EPD bull. Expected Progeny Difference is implemented in judging and considering the merit fo livestock based on specific traits they pass on, such as weight. 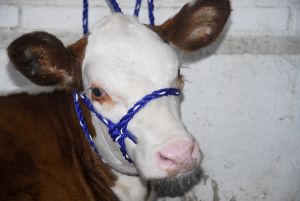 There are 240 herefords competing Sunday, Aug. 16, and the competition is stiff but Flaspohler says he’s having a good year.

Tim Flaspohler, Frank’s son, will show the cattle. He says he’s worked with them to ensure they show well, and will be grooming them for the judging.