The St. Louis Cardinals maintained their 4 1/2 game lead over the Chicago Cubs in the National League’s Central Division as they downed the San Diego Padres 7-4 Saturday night at Busch Stadium. 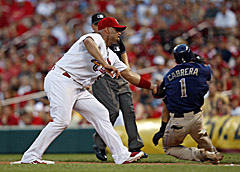 San Diego struck first in the 1st inning as Chase Headley’s single scored former Cardinal David Eckstein, who had walked and moved to third on an Adrian Gonzalez single.

St. Louis struck back in the bottom of the 1st with 3 runs. Colby Rasmus singled and scored from first on an Albert Pujols double. Pujols then scored ahead of Matt Holliday who belted his 16th home run of the season – his 6th as a Redbird – an estimated 431 feet to center field.

The Padres got a run back in the 3rd as Adrian Gonzalez stroked his 31st homer of the year, a solo shot to left field.

St. Louis scored its 4th run in the 4th as Skip Schumaker stroked a single to center field to drive in Julio Lugo, who got to first on a fielder’s choice, then moved to second on a walk to pitcher Joel Pineiro.

The Cards added to their lead in the 6th as Julio Lugo, who had singled and moved to second on a sacrifice bunt by starter and winning pitcher Joel Pineiro (11-9), scored on a Skip Schumaker base hit.

Pineiro got into some trouble in the 7th, giving up a run before being taken out for Dennys Reyes, who faced a pair of baters, allowing 2 hits, and was charged with San Diego’s fourth run of the night.

St. Louis got back a run and more in the bottom of the 7th as Ryan Ludwick doubled to lead off the inning and scored on a Mark DeRosa single. DeRosa, who had gone to third on a Yadier Molina ground rule double, then scored when Brendan Ryan hit into a fielder’s choice.

The Cubs had won earlier in the day against Pittsburgh, so the Cards needed a victory to hold onto their lead in the division.

The Cards and the Padres wrap up their weekend series Sunday afternoon at Busch, with Kyle Lohse (5-7) going to the mound for St. Louis against San Diego’s Clayton Richard (6-3).