The 2009 Missouri State Fair got underway Thursday with Governor Jay Nixon kicking off the festivities in Sedalia. It was hot, but not too hot for the Governor.

“It’s nice and cool,” said the Governor. “This is cool, August weather in Missouri.”

Nixon was joined by numerous agriculture officials as he presided over the ribbon cutting for the new Pork Building at the fairgrounds. And, the Governor stressed the importance of Missouri’s agriculture industry – particular the dairy industry. 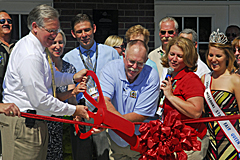 “These are the folks that are the starters in agriculture,” said Nixon. “They get up first. They get up at 3 am each and every day to do their work and we gotta back them up. We have a strong tradition of dairy farms in Missouri. We all still drink milk and eat ice cream. There’s a market out there and we gotta make sure we keep them alive.”

Shows with big name entertainers are scheduled for the grandstand throughout the ten-day fair. Lo Cash Cowboys and Cross Canadian Ragweed were Thursday night’s headliners. Future acts include Heart, Kansas, and Brooks and Dunn. The State Fair runs through Sunday, August 23rd.