A contingent of Missouri National Guardsmen will leave Fort Benning, Georgia, on the weekend for service in Afghanistan. And, while many Missourians might consider these missions “routine,” the man who is leading this group of Guardsmen into a war zone wants in known these operations are anything but routine. 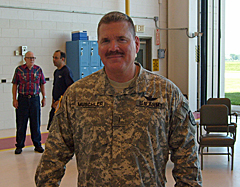 Missouri National Guard Command Chief Warrant Officer Don Muschler says going into a a part of the world in which there are hostilities is always a danger.

“We’re in a war zone – real bullets, real bombs, real bad guys wanting to impose their threat on us every day,” said Muschler as he prepared to leave Jefferson City for a week of training and preparations at Fort Benning. “The risk is there and the high threat is there.”

And no one gets accustomed to going to a war zone – no matter how many times a service member has been there.

But Muschler sees the big picture.

“We do this for the greater good and, hopefully, our children won’t have to do with what we’re doing now.”

The pilots and other personnel heading to Afghanistan will transport VIPs and others to locations in the theater of operations. These are not combat missions, but that does not mean they are danger-free. The ammunition fired at these planes can do just as much damage as they do to aircraft involved in combat.