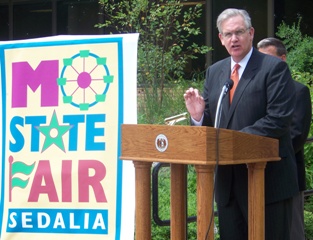 "Agriculture is the backbone of Missouri’s economy and the State Fair is our annual celebration of the best that we have to offer in this vital industry," Hagler said during a news conference at the Missouri Department of Agriculture in Jefferson City.

Opening Day ceremonies begin at 10am Thursday, with the parade at 6 that evening. Admission costs only a dollar the first day. Cross Canadian Ragweed and Cash Cowboys play that evening. Entertainment includes the MRCA Exceptional Rodeo, Heart, Kansas, Shinedown and Brooks & Dunn. The Governor’s Ham Breakfast will be held the 20th. The Fair wraps up Sunday, August 23rd.

Governor Nixon says he enjoys it all, but his favorite aspect?

"My favorite part is seeing the number of young 4-H’ers that are there, showing their animals," Nixon replied. "It just gives you a sense that agriculture, as an industry, in the state of Missouri has a long history, but also a bright future."

More than 4,600 FFA and 4-H students will exhibit livestock during the 11 days of the State Fair.