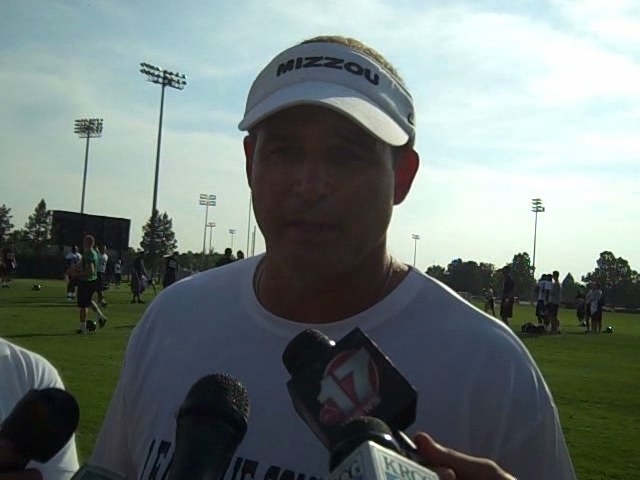 The 2009 Missouri Tiger football team kicked off the summer training camp with a focus on defense.  The coaches walked around with T-shirts that read "Lead the country" on the front and "Turnover margin" on the back.  Head coach Gary Pinkel said that was a big reason this team went from 12 to 10 wins last season.

Listen to Coach Pinkel talk about the turnovers and Sean Weatherspoon on being named team captain, plus watch some of the drills from the Tigers’ first practice, by clicking on the photo link above.

In 2007, when the Tigers won 12 games and were Cotton Bowl champions, they were one of the top teams in the nation in turnover ratio.  Last year, they were one of the worst and those turnovers were glaring in that home loss to Oklahoma State which became the turning point in what should have been a great season into a good season.

The slogan is great and it will re-focus the team with one of the true stats that does not lie.  If a team wins the turnover battle, they typically win the game.  The question, who will step up on defense?  Guys like Jacquies Smith, Brian Coulter, and redshirt freshmen Aldon Smith on the defensive end were strong in the spring game.  Can they apply enough pressure on the quarterback to force early throws.  I believe there are still a lot of questions with Missouri’s secondary and if Big 12 quarterbacks have time to throw, the Tigers could get burned.  Plus, I expect teams to try to stay away from Sean Weatherspoon.  The senior linebacker returned two interceptions for touchdowns last year.

The Tigers should be strong against the run with 6’1 305 pound nose tackle Jaron Baston clogging up the middle, but again, the key will be pass rushing.

Turnovers, just don’t come from the defensive side.  Eliminating turnovers and not forcing the issue on offense will be the biggest concern for offensive coordinator David Yost.  He’ll need to re-tool his offense around sophomore quarterback Blaine Gabbert to take some of the pressure off the first year starter, as Yost takes over the role of offensive coordinator.  I’ll be interested to see Gabbert’s poise early in the season.  Chase Daniel was a quarterback who made a lot of tough throws that most college quarterbacks couldn’t make, but because of that, he also made throws no college quarterback could make and they often resulted in an interception.  Brad Smith was the type of quarterback who protected the ball well, because when there wasn’t an open receiver, he just ran.  We’ll see how Gabbert develops in that area.

As a way to honor Aaron O’Neal, the Tigers have decided to do something else to further honor his memory going forward…by having a freshman linebacker wear #25 (AO’s number), in honorary fashion all throughout his career at Mizzou.

The first recipient is redshirt freshman linebacker Zaviar Gooden (Pflugerville, Texas).  Zaviar wore #40 last season, and had changed to #21 this spring, but he will now wear #25 the rest of his Tiger career, in honor of AO.  When Zaviar’s playing days are done, the #25 will be passed along to another freshman linebacker at that time.