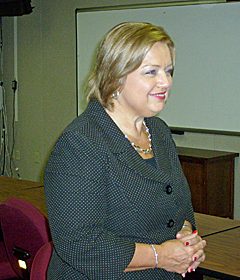 "This puts us at the table," said Nicastro in an interview with the Missourinet. "It gives us an opportunity to be an active player in developing any standards that our nation might consider for children."

Nicastro believes it is important to end the current patchwork of differing state-developed standards in favor of some uniformity.

"This particular movement or this particular document that the Board has authorized me to sign onto and I am signing onto really is an effort to create common standards across states," said Nicastro.

And Missouri will have the opportunity to reject what is not in the state’s best interests.

"The document is very clear that no state will have to lower their standards," said Nicastro. "In fact, when the standards are developed we have another decision to make about whether or not to adopt those."

The program is being conducted by the National Governors Association Center for Best Practices and the Council of Chief State School Officers, in partnership with Achieve, Incorporated, ACT, and The College Board.