The United States Postal Service today issued the Missouri State Flag Stamp, part of the " Flags of our Nation Stamp Series ". The Missouri stamp is one of ten stamps in the third edition of the series. A special commemorative stamp dedication ceremony was held in the Rotunda of the State Capitol. 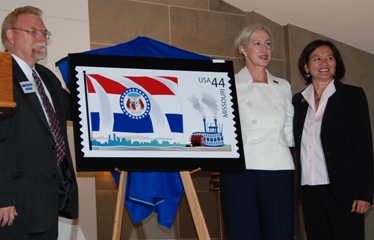 Jefferson City Postmaster Donald Knoth hosted the event, which featured speeches from First Lady Georganne Wheeler Nixon and U.S. Postal Service Gateway District Manager Danita Aquiningoc. During the ceremony, both Nixon and Aquiningoc took the opportunity to encourage Missourians to set aside electronic correspondence and pick up pen and paper to write letters that can be cherished by future generations.

The stamp features the "Oliver flag" which the state adopted on March 22, 1913. The flag was designed by Marie Elizabeth Oliver of Cape Girardeau.