Governor Nixon is laying out four points he wants in an autism bill this coming legislative session. 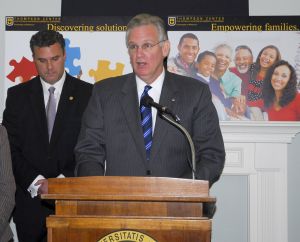 The Senate approved an autism bill but the House never took it up, a move Nixon says is inexcusable.

Nixon says he’s spent the last several months visiting with doctors, legislators, insurance representatives, parents and other Missourians. “I believe it will lead our state in the right direction in terms of dealing with these autism spectrum disorders,” he said of his plan.

The components he wants to see in a bill during the upcoming session are:

2. The bill must require coverage for applied behavioral analysis (ABA) treatment. Nixon says the state also needs to make sure “we have enough dollars in the bill to make it affordable, we think that we should have $55,000 per year.” He says 14 other states have mandates that are similar.

3. The bill must protect from an arbitrary cap of service for ABA and must allow treatment to be carried out. “We are all different human beings, we all have different needs,” he said.

4. Finally, the legislation needs to ensure patients can get and keep insurance coverage; carriers must not refuse to renew, terminate or further restrict coverage solely because of an autism diagnosis.

Nixon laid out his plan at the Thompson Center for Autism & Neurodevelopmental Disorders at the University of Missouri in Columbia, a facility he says is making breakthroughs every day. Following that, he traveled to the Judevine Center for Autism in St. Louis and then Children’s Mercy Hospital in Kansas City.

A bill Nixon supported failed in the legislature last session, a failure Nixon blames on leadership in the House of Representatives.

He says autism is a major and growing condition in Missouri that effects more than 30,000 people in the state. (The federal government says 1 in 150 people are effected by the disorder.) He says everyone supports the measure … except insurance companies.

“This is not a bill everybody will support,” Nixon said. “The insurance industry is not going to support this.”

His director of insurance, John Huff, says despite insurance lobbyists’ opposition to the bill, citing cost increases, he believes increases would be no more than 1 percent of premium costs.