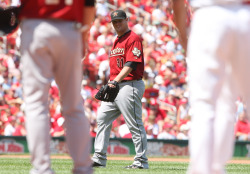 The Cardinals who have been red hot at the plate needed to worry about being no-hit.  Bud Norris’ bid ended when Adam Wainwright singled in the sixth, but Norris was still tough enough to slow down St. Louis.

The Cardinals couldn’t muster much against Norris who made his first major lead start.  Newly acquired Julio Lugo said Norris did a good job with his command and was very cool under pressure.  Meanwhile, Adam Wainwright wasn’t too shabby either.  He pitched seven innings allowing just two runs on eight hits.

Wainwright worked out of a jam in the fourth.  He allowed a run to score, but it could have been more after he gave up a lead-off double to Kaz Matsui and a single to Hunter Pence.  Pence stole second after a Carlos Lee strikeout and was stranded at third after Miguel Tejada singled home Matsui on an infield hit. Wainwright go two pop ups in foul territory to end the inning, the last one a great running catch by Albert Pujols as he caught the ball running down the line in right and climbed the tarp to end the inning.

In the seventh, Wainwright gave up a two out double to Michael Bourn that scored Ivan Rodriquez.  As for the Cardinal bats, they didn’t do much.  Matt Holliday, who went 7 for 8 with two homers and two RBI in the first two games went 0 for 4 and left three runners stranded.  He has been red hot since coming over to St. Louis on July 24 th .  He’s hitting .541.  In the meantime, Albert Pujols is hitting just .200 in that same time going 8 for 40 with no home runs and two RBI.  Pujols struck out in the 8 th inning with Ryan Ludwick attempting to steal which ended in a strike ’em out, throw ’em out double play.