Matt Holliday belted a pair of home runs, his 2nd and 3rd round-trippers in a St. Louis uniform and 13th and 14th overall on the season, and Chris Carpenter (10-3) went the distance for his tenth win of the year as the Cardinals downed the Houston Astros 3-1 Saturday night at Busch Stadium. 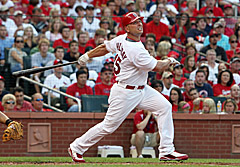 The Redbirds got on the board first in the 2nd inning as Holliday the first of his two homers. That gave Holliday at least one hit in each of his first 9 games as a Cardinal. The last St. Louis players to have 9-game hitting streaks at the start of their Cardinal careers were Charley Smith in 1966 and Alvin Dark in 1956. Both Smith and Dark started their S. Louis careers with 10-game hitting streaks.

Carlos Lee tied it up in the 4th with his 18th home run of the year – a solo blast into the Astros bullpen.

The Cards went ahead in the 7th as Chris Carpenter helped his own cause with a double, went to third on a passed ball charged to catcher Humberto Quintero, and scored on a Julio Lugo sacrifice fly to center field.

Holliday then smacked his second home run of the game into the center field bleachers over the outstretched arm of Jason Michaels.

Jeff Fulchino (4-4), who entered the game in the 5th inning when Houston starter Wandy Rodriguez suffered a strained right hamstring, took the loss.

The Redbirds and Astros play the finale of the series Sunday at Busch Stadium with Adam Wainwright (12-6) going to the mound against Houston’s Bud Norris (0-0).

Prior to the game the Cardinals announced they had optioned right handed pitcher Mitchell Boggs to AAA Memphis and activated infielder Khalil Greene from the 15-day disabled list.