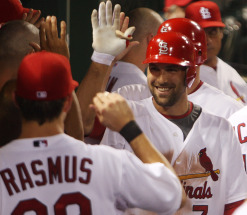 The Cardinals are back in first place after beating the Dodgers 10-0 at Busch Stadium.  The one hour and 25 minute rain delay didn’t hurt Adam Wainwright at all.

Backed by some outstanding defensive plays,  Adam Wainwright threw eight shutout innings.   He wiggled out of a couple of jams as he gave up eight hits.  It was the second game in a row the Dodgers put runners on base, but couldn’t push across any runs getting outscored 16-1 in the first two games.

With a scoreless tie heading into the sixth, the Cardinals got to Chad Billingsley scoring six runs.  Ryan Ludwick and Yadier Molina drove in two runs apiece and Wainwright chased Billingsley when he singled home Molina.  The Cardinals tacked on four more in the eighth thanks in part to a three run homer from Mark DeRosa.  DeRosa now has 19 homers on the year, six since joining the Cardinals and three in his last three games.  (Shown after hitting his home run.  Photo by Bill Greenblatt)

The additions of Holliday and DeRosa will really take the pressure off of Albert Pujols and it comes at a great time when he’s slumping a bit.  Could you imagine what could have happened after that 2-5 road trip, coming into this Dodgers’ series without support for Pujols?  The key test of this series is going to come in games three and four.  You had to figure that with Carpenter and Wainwright on the mound, the Cardinals would have a chance to win each game.  Now, what will they do with Pineiro and Lohse starting the final two games?  The Dodgers have 17 hits against Carpenter and Wainwright and somehow the good pitchers find a way to work out of jams.  If the Dodgers combine for 17 hits in the next two games against the rest of the staff, they’re capable of putting 8-9 runs on the board.

Previous Post: « Buck comes through in the 11th for KC
Next Post: Joplin native McMurray looking for ride in 2010 »