Governor Nixon has returned from his trip visiting Missouri’s military personnel in Iraq and Afghanistan, reflecting on their dedication to their mission 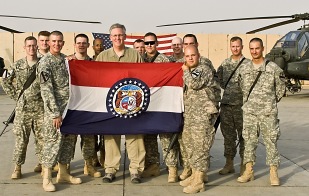 Nixon joined a Department of Defense sponsored tour with four other governors, touring Iraq, Afghanistan as well as a military hospital in Germany. In the outer reaches of Afghanistan, Nixon met with the Missouri National Guard ‘s Agri-Business Development Team, about 60 Missourians teaching Afghan farmers better methods of agriculture.

“To try to get them to quit growing poppies and making heroin and, instead, grow food crops,” Nixon told the Missourinet. “And also, at the same time, getting out there and dealing with issues on water as well as bringing the opportunity to interact directly with those folks right on the borders of the countries so that we get solid intelligence and that we win not only the war we are in, but the peace afterwards.”

Nixon completed a two-day tour of US military units in Afghanistan after touring Iraq, now largely given back to the Iraqi government. Nixon said the Department of Defense called his office about three-and-a-half weeks ago, inviting him to join a delegation of governors touring the Middle East. He flew to Washington, D.C. Friday, July 17th to be briefed before flying to Kuwait. He returned late on Wednesday, July 22nd. The other governors on the trip are Rick Perry of Texas, Tim Pawlenty of Minnesota, Pat Quinn of Illinois and Jim Gibbons of Nevada.

Missouri has a significant presence in the countries. Along with the Agricultural Development Team, the 1140th Military Police Company serves in Afghanistan. A Military Transition Team serves in Iraq. Six additional Missouri National Guard units are scheduled to deploy to Iraq and Afghanistan later this year.

Nixon and the other governors visited the US Embassy and military installations in Kabul, Afghanistan and met with soldiers in Bagram. During the two days in Iraq, Nixon met with Missouri soldiers serving in Baghdad and Basra.

Those Missourians impress their governor.

“These are professional soldiers all of whom have joined and given up parts of their life many with families back here,” Nixon said. “So, the take away for me was the look in the faces of the soldiers and the commitment that they had from top to bottom to lean forward, to be strong and to get their task accomplished.”

Nixon says he wanted to see how the military has integrated National Guard units, the Reserves and the regular Army. He says it seems to be working well. Nixon also, along with the other governors, has requested that once the equipment being used by the American military in Iraq is no longer needed, that some of it can be sent back to Missouri to use in the National Guard’s responsibilities here.

The trip concluded with a stop at a military hospital the United States runs in Landstuhl, Germany.