State and federal officials gathered in Jefferson City for the two day Governor’s Summit on Food Safety are assuring consumers that Missouri’s and America’s food is – for the most part – safe. 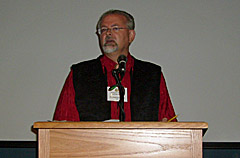 Doctor Dan Engeljohn with the U.S. Department of Agriculture’s Food Safety and Inspection Service, says inspectors are at work – every day of the week – visiting food producers and conducting random samplings of meat and poultry products.

"The agency has programs designed to test products in the facilities where the food is being manufactured," Engeljohn told the Missourinet in an interview. "So that’s in the federally inspected facilities. We also do surveillance at retail and we can do surveillance at restaurants, as well. But the overwhelming majority is in the plants where the product is actually produced."

There is little chance that a company involved in food processing or manufacturing will be missed.

"If you produce a product for which we have a performance standard," said Engeljohn. "You will be tested and you will be tested multiple times each year – not just once every other year or so forth. You will have some form of testing, likely, every year."

Engeljohn says that while the level of testing is very high, there are still chances for contaminated foods to slip onto the market.

"Most of the testing that we do takes two to three days to actually get a confirmed response," said Engeljohn. "So, oftentimes, many of the recalls that we have are as a consequence of we pull a sample, but the establishment releases the product into the marketplace before the sample result is returned."