Governor Nixon is in the Middle East with a handful of other governors visiting Missouri National Guard members while making a special pitch to the Pentagon. 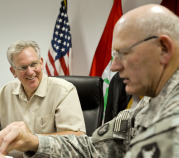 After a day touring Baghdad, Iraq, Nixon spoke with reporters from a military base in Kuwait. Nixon says the purpose of the trip is three-fold, primarily meeting with Missouri Guard personnel.

"And, then to assess where we are and what demands will be in the future," Nixon stated. "Also to say as troop withdrawals begin here and as equipment is moved out that we in the Missouri National Guard are going to making a strong pitch to get some of that equipment back to Missouri."

Nixon said all the governors are pressing the Pentagon to release some of the equipment now being used in Iraq for use back home. The other governors on the trip are Rick Perry of Texas, Tim Pawlenty of Minnesota, Pat Quinn of Illinois and Jim Gibbons of Nevada.

Nixon flew to Washington, D.C. Friday morning and left for the Middle East at around 11:30 Friday morning. Nixon got to tour Baghdad on Saturday.

"For me, it was a transition point," Nixon said of his tour of the Iraqi capital. "To literally stand there where Saddam had stood shooting his shotgun in the air and, instead, see that turf being ours as visitors and the Iraqis being the ones that are in charge of being responsible for it, I thought was a very moving moment."

The governor says military rules won’t allow him to disclose where he will be next…or how long he will remain in the Middle East.