When Walter Cronkite was six years old, he became a news analyst—taking a Kansas City Times newspaper to a neighbor and telling the neighbor about the importance of the lead story–the death of President Harding. Cronkite was born in St. Joseph and lived in Kansas City until he was ten, when the family moved to Texas. Cronkite died Friday night at the age of 92. 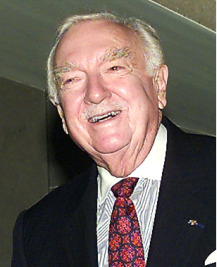 The cause was complications of dementia, said Chip Cronkite, his son.

When he was 19 he became the first news director of KCMO Radio in Kansas City. In his autobiography, A Reporter’s Life, he reported most of the stories he did were rewrites from the Kansas City newspapers.

Cronkite met his wife, Betsy, while he was working at the radio station. They were married a few years later. Mrs. Cronkite flew out of blockaded Berlin in the post-World War Two years so she could have their first child in Kansas City, not Moscow–where Cronkite was the head of the Moscow Bureau for United Press.

Cronkite was about to open a bureau in Washington to serve several midwestern radio stations when CBS asked him to broadcast television news on Washington staiton WTOP-TV. He anchored the 1952 Democratic and Republican national conventions, the first national conventions on television. Ten years later, he succeeded Douglas Edwards as the anchorman–he carried the title "managing editor"–of the CBS Evening News in 1962. At the time, the program was a 15-minute show. He was in the anchor chair when the newscast became the first network half-hour evening newscast on September 2, 1963.

Thousands, millions, of Americans mark some of their lives’ milestones by the things Cronkite is rememberd for reporting–the John Kennedy assassination, the first landing on the moon, elections, conventions, and the Vietnam War. His influence in the public mind was so substantial that after he had finished a special report on the Tet Offensive in Vietnam that termed the war unwinnable, President Lyndon Johnson took note. Cronkite wrote about it in his memoir, quoting a description of the scene by Bill Moyers, then a Johnson aide.

He retired from the CBS Evening News in 1980 but remained active in several projects and programs until recent years.

Attached to this story are Cronkite’s remarks at the Capitol the night his bust for the Hall of Famous Missourians was unveiled.