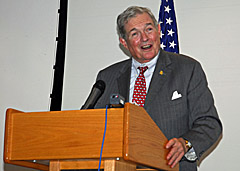 “I don’t know about you, but I sleep better at night knowing that our Guard and reserve troops – as well as active duty-have the equipment they need to perform their missions,” Bond said. “We have a responsibility to support them in their unique dual mission of providing military support abroad and homeland defense stateside.”

“The historic mission the National Guard has been engaged in for our state and nation has proven what a vital component the modern day Guard is for our national defense and in response to disasters,” says Bill Adams, retired Command Sergeant Major of the Missouri Army National Guard. “As Missouri’s former Governor and as our U.S. Senator, Kit Bond has always understood the important mission of the dedicated troops in the ranks of National Guard and has fought long and hard to provide the necessary resources for training or activation to answer the call for Missouri or our nation when called upon.”

“He knows and understands what we do and what we need.”

As co-chairs of the Senate National Guard Caucus, Senators Bond and Patrick Leahy (D-Vermont) led the fight to secure $500 million in additional funding for Guard equipment in the fiscal year 2009 supplemental appropriations bill for the Iraq and Afghanistan wars. The Guard will use the funds to purchase items such as high-water trucks, military Humvees, communications equipment and night-vision goggles, Bond said.

Despite this announcement, Bond stressed that the Guard is often given short shrift by the U.S. Department of Defense, which for years cut Guard personnel and equipment budgets. Bond warned that while the active-duty services requested additional procurement funds for the Guard in recent years, the Guard is dangerously short of equipment.

Last year, Bond and Leahy successfully authorized the promotion of the Chief of the National Guard to the rank of four-star general to give the Guard greater influence inside the Pentagon.

The Bond-Leahy provision will also give the bureau and states’ adjutant general budgetary power to procure equipment for domestic missions, which will help them prepare and respond to emergencies at home. Bond explained that this provision ensures that all available military forces are utilized as early as possible in an emergency situation. He noted that in many situations reserve units stationed within close proximity to a natural or man-made disaster are forced to stand by and watch, instead of assisting injured victims and preventing property losses.

In closing, Bond said, “In today’s world, the need for the National Guard is greater now than ever before. As budgets are constrained and entitlements continue to grow at alarming rates, we should not be looking to reduce the guard, but fully-man and fully-equip it. Know that I will continue to fight hard for the National Guard and the Missouri Guard during my remaining time in the U.S. Senate.”