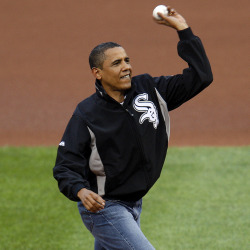 There were only two people that got booed in Busch Stadium.  One was Ted Lilly from the Chicago Cubs.  The other was President Obama, who is a fan of the Southsiders from Chicago and he showed off his team colors yesterday.  The Cardinal and pro National League crowd let him hear about it.

I heard several comments, saw plenty of tweets on twitter and read it on blogs…people saying "how can you boo our President?"  This wasn’t politically motivated.  This was strictly baseball.  Not even the free leader of the world could pull off wearing something other than Cardinal red and not expect to get called on it.

The President warmed up before coming out onto the field and as you can see from Bill Greenblatt’s photo, President Obama has pretty good form.  He floated it up there…didn’t bounce it and it took a good stretch from Albert to haul it in, but he made it.

St. Charles, MO native Mark Buehrle who pitches for the Sox said the President told him in the clubhouse he would wear his Sox jacket.  Even Buehrle was surprised by the move.


Listen to Pujols and Buerhle on Obama