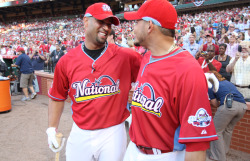 First off I have to say the city of St. Louis and the Cardinals have put on a first class event.  Since this is my first All-Star game whether coming as a fan or covering it as someone in the media I can’t compare it to others, but it’s been a great experience.  With that said, here are some random thoughts on my two days in St. Louis.

If you were willing to pay $350 to some guy on the streets to see the Home Run Derby, you’re an idiot.

The best jersey I saw was a guy wearing an authentic Bad News Bears jersey with Chico Bail Bonds as the sponsor.  He said he bought it off HRderby.com

Thanks to ESPN, the Home Run Derby is too long.  Each hitter should get seven outs instead of 10 and a maximum number of 20 pitches.  You don’t swing, tough luck.

The more and more I think about it, they shouldn’t have seven and eight year olds shagging fly balls during the home run derby.  One day, one of those little ones are going to get hurt from a screaming one hopper to the outfield.

Ball players who are complete jerks (to the fans).  Josh Beckett of Boston, Ichiro of Seattle.

Brandon Inge of Detroit has the biggest calf muscles I have ever seen.  Too bad they couldn’t help him hit at least one home run.

Bob Costas is really short.  So is Tim Kurkjian and Karl Ravech of ESPN.  I’m 5’9 and I was towering over those dudes.

Dave Winfield is one biiiig dude.  His hand could palm a medicine ball.

NL manager Charlie Manuel is not as fat as he looks on TV.  AL manager Joe Maddon is one cool lookin’ dude.

Phil Bradley, a former major leaguer who has his name displayed on the sidelines of Faurot Field couldn’t give me one thought on the current Missouri football team, saying "I have no idea…I don’t follow them."

Ted Lilly of the Cubs was the only player boo’d by fans as he arrived on the red carpet.  All in good fun from playful Cardinal fans.

Each one of the player’s wives is drop dead gorgeous.

I forgot that Royals’ manager Trey Hillman was chosen as a bench coach.

I hope Zack Greinke gets a chance to pitch.  I hope Pujols homers…but not off Grienke.

I was amazed to see Marlins’ shortstop Hanley Ramirez run off the field and as he was moving throw a ball 15 rows up to a Marlins’ fan who didn’t have to move his hand to catch the ball.  That was amazing.