The 2009 Tour of Missouri bicycle race will go on this year as Governor Jay Nixon has reversed a recommendation from the Department of Economic Development that $1.5 million for the race be cut from the Division of Tourism budget. 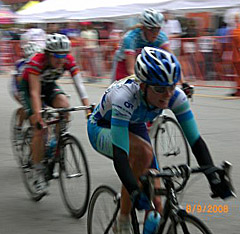 Lieutenant Governor Peter Kinder, who has championed the Tour of Missouri since its inception, is pleased that the event will not be scuttled. And, during a hastily called telephone conference call, he made that clear to reporters listening in.

“I am delighted by the news today,” said the Lieutenant Governor. “That Governor Nixon has, approximately two hours ago, released the funds and that we will be able, without any doubt, to go ahead and execute this race.”

Kinder then took advantage of the opportunity to needle Governor Nixon.

“I am especially delighted to be able to welcome Governor Jay Nixon to the ranks of supporters of this race, of this wonderful event for our state,” said Kinder. “Today is the first day we have ever had any indication from Governor Nixon that he is supportive of our efforts. And I repeat – I am thrilled and delighted to welcome Governor Nixon to the ranks of supporters of Missouri and backers of this wonderful event.”

Kinder then thanked those who contacted the Governor’s Office when word came down that the race might be cancelled.

“The outpouring and the e-mails and the telephone calls to the Governor have been remarkable,” said Kinder. “And I believe it is you – supporters of this race, this is not my victory, it is your victory and it is a victory for the State of Missouri – that you have earned this outcome.”