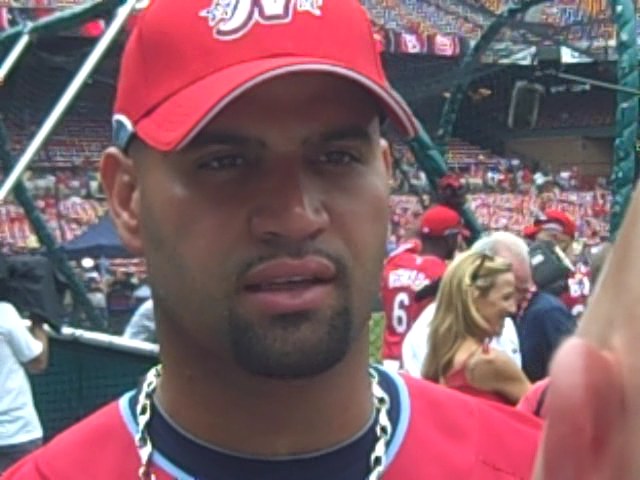 Adam Jones’ sac fly in the eighth inning gave the American League a 4-3 win in the 80 th All-Star game giving the American League their 13 straight game without a loss.  Pujols, Molina, Franklin, and Greinke all performed well.  (Click on Pujols’ photo to watch the Red Carpet Parade)

A lead off single by Ichiro and Derek Jeter getting plunked by Tim Lincecum put the National League in trouble early.  After Ichiro was forced at third, Pujols let a potential ground ball double play hit the heel of his glove allowing Jeter to score.  Another force out at second led to the American League’s second run.

The National League rallied with two outs in the bottom of the second.  David Wright had a broken bat single to center and Shane Victorino laced a single to right.  That brought up Yadier Molina who brought the crowd to it’s feet with a single to center that scored Wright.  Josh Hamilton’s throw to third got away from Michael Young allowing Victorino to score.  Molina then scored when Prince Fielder hit a ground rule double down the left field line to put the NL up 3-2.

Joe Mauer doubled in the fifth inning off LA’s Chad Billingsley to tie the game at 3-3. The National League had a chance to grab the lead when Colorado’s Brad Hawpe hit a deep drive to left field that was grabbed over the wall by Tampa’s Carl Crawford keeping the game tied in the seventh.  Crawford was named MVP.

Here’s a breakdown of how players with Missouri ties performed:

Yadier Molina: Singled in the 2 nd inning to drive in two runs.  He later scored on an RBI double from Prince Fielder.

Albert Pujols:  After a first inning error, Pujols made four outstanding plays diving to his left and right to save hits and additional runs.

Zack Greinke:  Pitched a scoreless inning striking out two batters in the fourth.

Ryan Howard:  Former Missouri State alum struck out in the 8 th with two runners on.

Mark Buerhle:  St. Charles native got to face Pujols and breezed through a 1-2-3 third inning.

Click to listen to comments from Pujols, Franklin, Greinke and Buehrle as Pujols talks about the home crowd reception; Franklin on his quick inning of work; Buehrle on pitching in front of his home town; and Greinke’s experience.