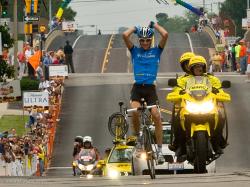 Could the Governor’s office be putting the brakes on the Tour of Missouri Bike Race?  State economic development director Linda Martinez has suggested eliminating state support of the race which is about $1.5 million of the $3.3 million it takes to fund the race.

The Tour of Missouri cuts are apart of $9.9 million in proposed budget cuts for the tourism department.  In just two years, the Tour of Missouri has become one of the biggest pro cycling events in the U.S.  According to Lt. Governor Peter Kinder, a study done shows that spectators spent between $25-$30 million dollars during the week long race.  It is also estimated that 400,000 spectators, with half of those being out of state visitors, came to Missouri to watch the race.

Organizers of the race say if the state backs out on their support, the race will be cancelled.  The outline of the budget cuts are only recommendations from Martinez.  The final decision will come down to Governor Jay Nixon and his budget director Linda Luebbering.  That decision could come in the next couple of weeks.

The Tour of Missouri is scheduled to run from September 7 th -13 th .  Another popular bike race in the States is the Tour of Georgia.  That race was also cancelled this year after organizers were unable to secure a title sponsor for their race.

This news comes at a time when cycling has drawn some interest in the state.  Lance Armstrong is near the top in the Tour de France and his team is scheduled to race here in Missouri.  There has also been speculation that Armstrong would come to the Show Me State.