Governor Nixon has signed a wide range of crime bills into law, after touring the State Highway Patrol Crime Lab in Jefferson City. 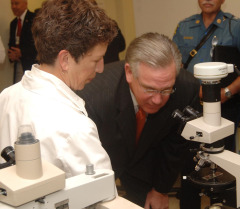 "Protecting the people of Missouri and providing a safe place to raise our families is the most important thing we do in government," Nixon said during a signing ceremony at the lab. "The actions we take on these issues send a message about where we stand as a society. Are we going to confront the problems we face or are we going to ignore them and hope crime doesn’t affect us?"

Nixon has signed five separate bills. HB 152 requires those arrested for burglary and violent crime to give a DNA sample. HB 685 streamlines the serving of warrants by no longer requiring that a sheriff’s deputy accompany a State Highway Patrol trooper. HB 863 provides rights for children forced to testify at trial and SB 36 imposes sentence of life in prison for anyone who rapes a child. The final bill, HB 62 , was an omnibus crime bill covering a number of subjects.

When asked by a reporter after the ceremony whether HB 152 violated civil liberties, Nixon defended the measure. Nixon compared it to a driver stopped on the suspicion of driving drunk being required to give a breathalyzer test. He also noted that DNA doesn’t just serve the purposes of law enforcement.

"The other thing about DNA you cannot ever forget: we in law enforcement talk all the time about how it gets the right guy or gal. It finds people guilty," Nixon said, "but, also, time after time has cleared people of offenses."

A provision within the bill requires that the DNA sample be destroyed if the person arrested is never charged with the crime.

The governor held ceremonial signings at the crime labs at the State Highway Patrol headquarters in Jefferson City and in Springfield. He also held a signing ceremony at the Highway Patrol satellite office in Carthage.