The Humane Society of Missouri in St. Louis is dealing with the aftermath of a 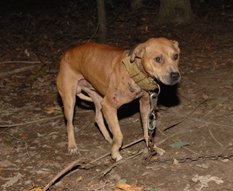 Jeane Jae with the Humane Society says nearly 450 pit bulls were seized … Missouri is accomodating 378 of them.

Right now, she says, the animals are being evaluated for health and behavior. It’s not yet known if any of them can be rehabilitated into pets. Jae says the U.S. District Court has asked the Humane Society to not comment on the condition of the animals while the investigation continues.

“We are committed to giving dogs who have come from such horrible abuse the absolute best chance for a good life,” said Debbie Hill, vice president of Operations for the Humane Society of Missouri and director of the temporary shelter. “It is a tragedy that because of mistreatment by humans for financial gain and so-called sport, many dogs used in animal fighting may not ever be able to be placed in a home situation.”

Five Missouri men have been charged with operating illegal kennels. The bust is believed to be the largest dog fighting raid in U.S. history.

The Humane Society of Missouri is working in cooperation with the Missouri State Highway Patrol, the United States Department of Agriculture’s Office of the Inspector General, the Federal Bureau of Investigation, the U.S. Marshals Service and the United States Attorney.

Arrests and seizures were made in Missouri, Illinois, Iowa, Texas and Oklahoma Wednesday, July 8. Investigators from the Humane Society of Missouri Animal Cruelty Task Force provided the information that led to the investigation.

“The Humane Society of Missouri is vehemently opposed to this heinous blood sport. The way animals used in dog fighting are abused, at the hands of people for profit, is absolutely abhorrent,” said Kathy Warnick, president of the Humane Society of Missouri. “We are grateful to the state and federal agencies for aggressively pursuing this investigation and bringing to justice those who perpetuate the systematic torture of dogs for sport and profit. Dog fighting is happening in every community in our state, right under our noses. Hopefully, public awareness and outrage will bring an end to this cruel and heinous form of animal abuse.”

The multi-location rescue and transport operation required the training and experience of professional animal handlers from the various animal welfare organizations in addition to a variety of specialized animal transport vehicles. “Dog fighting is dangerous business for dogs and for people,” says Tim Rickey, director of the Humane Society of Missouri’s Animal Cruelty Task Force. “[The] rescue sends a significant message that this form of animal abuse will no longer be tolerated. We hope it leads to many other such operations to bring an end to dog fighting in the United States.”

The indictment alleges that the defendants routinely inhumanely abandoned, destroyed, and otherwise disposed of the animals that lost fighting competitions, did not perform aggressively enough, or that became injured, wounded, or disabled as a result of participating in an animal fighting ventures.

Headed by the U. S. Department of Agriculture’s Office of Inspector General, this dog fighting investigation is the latest in a series of major animal fighting investigations conducted throughout the country since the passage of the Animal Fighting Prohibition Enforcement Act, signed into law in May 2007, which makes it a felony to participate in the blood sport.

If convicted, each count of the indictment carries a maximum penalty of five years in prison and/or fines up to $250,000.