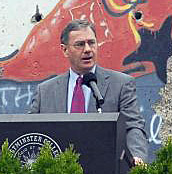 The goal is to use tax breaks to encourage investment, expansion and job creation at small businesses throughout the country.

"To get some capital in their businesses what we’re trying to do is enable them to depreciate, more quickly, things they haven’t been able to do before," said Luetkemeyer in an interview with the Missourinet. "Such as real improvements to the property. For instance, the buildings they put on there. They can expense those things. They can expense a new roof. You could expense a new building so you could take immediate credit for that and use those dollars, then, for capital improvements to get things going."

The legislation would add a section to the Internal Revenue Code for a qualified real property deduction, allowing a business to deduct up to $125,000 of those costs immediately. The concern is that there would be a cost to the federal government in that fewer tax dollars would be coming in.

"This is tax relief," said Luetkemeyer. "These businesses are paying less tax. So what’s the amount that they’re paying less in totality to the government?"

Luetkemeyer hopes to see the bill get a hearing before a U.S. House committee in September or October.