Governor Nixon signs a minor autism bill, blaming House leadership for blocking a bill that would have mandated insurance coverage of the disorder. 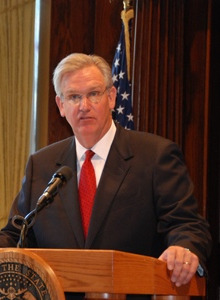 "So now I would like to sign HB 525 and SB 157 into law," Nixon tells those gathered in his Capitol office. "Next year I want to invite everyone for one year for now when I’m signing an autism insurance mandate bill, but that’s of course another subject."

SB 167 , that would have required health insurance companies to cover autism disorders, cleared the Senate 29-to-3. It easily passed a House committee. It never came to the floor of the House for a vote.

"There are no excuses for the House of Representatives not to take an open, public vote on the bill that was passed by the Senate last year," Nixon says.

Nixon lays the blame squarely on House leaders who he says have never explained their reasoning.

"They don’t have any arguments against it. The only argument is that the insurance industry doesn’t want it. That’s not an argument. That’s a position that a special interest is taking," Nixon says with emotion. "They’re wrong. We’re right. We’re going to continue to press this fight in the light of the day. It is my hope and expectation that about 365 days from today, we’ll be right here signing that bill."

Nixon claims the autism mandate would have passed the House had it ever reached the floor for a vote.