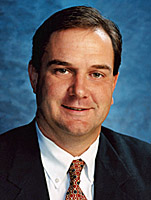 "I was appointed to the commission in the spring of 2005," he said. "During that time, I have witnessed a rebirth at the Missouri Department of Transportation. The department has delivered on its promises to the people of Missouri often times under budget and ahead of schedule. I am honored to have served with great commissioners and with the outstanding employees at MoDOT. It is, however, time for a new chapter in my life."

Some speculate Kehoe is eyeing the Missouri Senate seat that will be vacated by Carl Vogel of Jefferson City, who is term limited in 2010.

The commission is the governing board that oversees MoDOT.

Gov. Jay Nixon will appoint a new commissioner. Kehoe, who owns a car dealership in Jefferson City, said he had notified the governor of his resignation in a letter.

Other members of the commission are Duane Michie of Caruthersville, Grace Nichols of St. Charles and Joe Carmichael of Springfield.

The commission is made up of three Democrats and three Republicans. Commissioners are appointed to six-year terms that are staggered so that no more than two leave the panel in a given year.

Previous Post: « This time, I’m the one who is interviewed
Next Post: Nixon signs consumer mortgage protection bill »