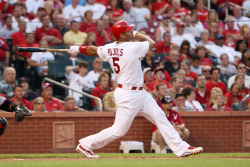 Albert Pujols is in!  He will take part in the Home Run Derby on Monday as he will headline four National League first basemen.  Joining Pujols will be St. Louis native Ryan Howard.

Milwaukee’s Prince Fielder and San Diego’s Adrian Gonzalez round out the National League roster.  Pujols leads all of baseball with 31 homers.   Fielder and Howard are veterans to the Derby, but Gonzalez is having a career year with 24 homers for San Diego.

Howard won the Derby in 2006 in Pittsburgh, while Pujols advanced to the semifinals in 2007 while Fielder and Howard never made it out of the first round.