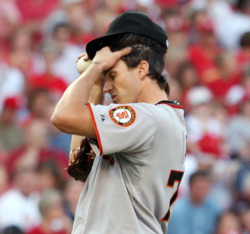 With the help of three runs in the first inning, Cardinals starter Todd Wellemeyer bounced back after some recent shaky starts to get the win in a 5-2 final last night.  The Cardinals win the last two games to split the four game series with San Francisco.

Wellemeyer went 7.1 innings, allowing just the two runs while striking out six.  He got that early run support when the first five Cardinals reached back in the first inning before Giants starter Barry Zito could record an out.

Brendan Ryan led off with a single and Skip Schumaker doubled.  Then Zito intentionally walked Albert Pujols to bring up Ryan Ludwick.  He delivered on Wednesday and did it twice on Thursday after the Giants would walk Pujols by delivering an RBI single.  Zito then walked Molina scoring the second run and Pujols scored on a force out by Chris Duncan.

Ludwick singled in the fifth Cardinal run in the fifth when Zito elected to pitch around Pujols again putting runners on first and third.

Wellemeyer got chased in the eighth when Aaron Rowand hit a two run homer to finish his night, but Wellemeyer says it is the best he felt all season.

Listen below to Tony LaRussa and more of Wellemyer’s comments.  It’s a great weekend for National League Central play.  The Brewers, now tied with St. Louis playing at Wrigley where the Cubs are just 2.5 games back and now the Cardinals head to Cincinnati where the Reds are only 2 games out.