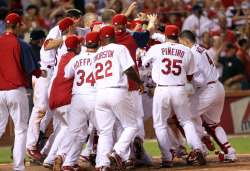 Colby Rasmus’ walk off 10 th inning home run off Giants’ reliever Bob Howry saved an outstanding pitching performance from Adam Wainwright who didn’t get the win, but certainly deserved it after his performance Wednesday night at Busch Stadium. (Bill Greenblatt, UPI shows the mob scene around Rasmus at home plate.)

Wainwright gave up just one run and that came on a bases loaded sac fly by Giants catcher Bengie Molina to tie the game at 1-1.  I really thought the game was going to get away from the Cardinals in that inning.

Wainwright gave up a lead-off double to Fred Lewis and a single to Aaron Rowand and then walked Randy Winn to load the bases with nobody out.  Wainwright got Pablo Sandoval to strikeout, then gave up a long fly ball to Bengie Molina that tied the game.  Wainwright still needed to work out of the jam with two runners on and got Nate Schierholtz to strike out swinging.

Wainwright came back and pitched the ninth as well, but gave way to Ryan Franklin after the game went to extra innings.  The Cardinal bats couldn’t do much against Giants starter Matt Cain.  After Skip Schumaker led off with an infield single and advance to second on a throwing error, Cain intentionally walked Albert Pujols to get to Ryan Ludwick, in theory a smart move, but Ludwick delivered with an RBI single.  The Cardinals would get just five more hits off Cain through seven innings.

The Cardinals have won 12 of their 42 games when they have scored three or fewer runs.