Chris Nicastro has been chosen by the State Board of Education to be the Missouri Commissioner of Education.

She replaces Kent King, who died in January after a long illness. 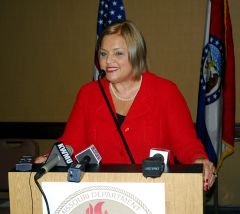 "Chris brings a strong background of experience in Missouri public schools and a successful track record in a challenging suburban environment," says David Liechti of St. Joseph, the president of the Board of Education. "She is well-known within the educational community and she recognizes the obstacles that we face in helping low-performing schools get better."

Nicastro comes from the Hazelwood School District in St. Louis County, where she has been superintendent since 2002. The Missouri Association fo School Administrators honored her last year as the Superintendent of the Year.

Nicastro says she thinks her experience in Hazelwood has prepared her to take this step and she says she looks forward to working with other state officials and the State Board of Education to sustain the progress Missouri has made over the past 15 years.

"Since the Outstanding Schools Act was passed in 1993, education in Missouri has improved significantly," she says. "Ongoing monitoring on every level ensures that instructional improvement takes place."

However, she says there remain districts that have shown little sign of improvement, serving some 68,000 students.

"We cannot afford over 7 percent of our student population to be at risk because of where they live," she says.

Nicastro, 58, is the fifth person — and the first woman — to serve as Missouri’s top official for public schools. She begins Aug. 1 and her salary has been set at $185,400.