Summer months are the most deadly on Missouri Highways and the HEAT is On campaign aims to keep fatalities and injuries down.

More than a thousand people were killed during July, August and September over 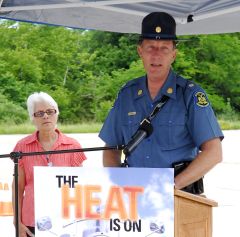 the last four years. That’s why HEAT, high enforcement action teams, are forming a strategic initiative to crack down on the three main causes of dangerous crashes — alcohol, inattention and speed.

The patrol reports that so far this year there have been 375 fatalaties compared to 445 this time last year — a 15 percent decrease. Coffey says enforcement’s goal is to see that downward trend continue.

Coffey says the patrol hopes to lower the number of fatalities to fewer than 850 by 2012, a goal that can only be achieved if summer accidents decrease.

The patrol reminds motorists that seatbelt enforcement is also a priority.