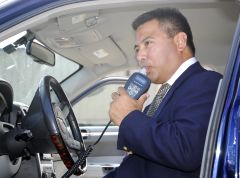 offenders; the tougher restrictions will not be a burden on Missouri taxpayers. The law will mostly affect future offenders, but Department of Revenue spokesman Ted Farnen says the statute will impact some 70,000 of those currently under restricted and revoked licenses.

The Highway Patrol asks drivers to imagine MU’s Faurot Field packed to capacity with 70,000 screaming fans … now imagine every single one fo them has alcohol-related driving offenses. That’s what they’re up against. There are approximately 4.1 million licensed drivers in the state.

The patrol adds that in addition to stopping repeat offenders from driving impaired, it’s important to prevent any driver — even those without a first offense — from driving impaired. In 2008, 262 people were killed, 1,113 seriously injured and 3.398 received minor injuries in crashes involving an impaired driver. F

arnen warns those who try to skirt the system that not only does the modern technology have fool-proof measures in place, but those caught driving without the device installed in their cars face stiff penalties according to the new law.

Vendors of the interlock devices not only is an alcohol-free breath required to start the vehicle, random blows while the car is traveling down the highway. The car’s horn will start sounding and the lights flashing until a new sample is submitted while the vehicle is in motion. Also, most devices require a humming sound so that artificial air sources cannot initiate a false pass. All failed submissions are logged by the state. While the state does not know if it will require such a feature for some, there are interlock devices available with camera capabilities, so that if the non driver is blowing into it, the state can log that as well.