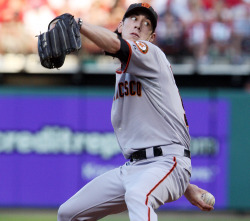 Ryan Ludwick had a great line after Monday night’s 10-0 loss to San Francisco when he said of Tim Lincecum, "I could be wrong, but I think he won the Cy Young last year."  The Giants starting pitcher certainly pitched like it as he went the distance allowing just two hits while striking out eight.

A single from Rick Ankiel in the fifth and a double by Albert Pujols in the seventh was all the Cardinals could muster against Lincecum who is now 8-2 with a 2.37 ERA.

The Giants got to Brad Thompson in the first inning when Yadi’s brother Bengie picked up an RBI single and in the fourth, Travis Ishikawa hit a three run homer to put San Fran up 4-0.

That would be plenty of support for Lincecum, but the Giants piled on recently called up Clayton Mortensen who gives Tony LaRussa 13 pitchers after the Cardinals placed Khalil Greene on the DL again for anxiety disorder.

Juan Uribe doubled to start the 7 th off Mortensen and moved to third on a Lincecum bunt.  Aaron Rowand was hit by a pitch and a throwing error by Skip Schumaker scored a run.  Molina singled in another run and later in the inning after a walk to load the bases, Mortensen gave up a bases clearing double to former Cardinals Edgar Renteria.  A solo homer in the 8 th rounded out the scoring.