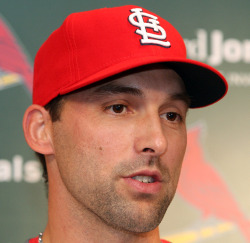 Cubs’ fans have to be scratching their heads over this one.  For the last two years, Mark DeRosa has been their team’s most valuable player.  After trading him to Cleveland to dump salary and make room for Milton Bradley, the Cardinals swooped up and nabbed DeRosa this weekend.

The reason I say DeRosa was the Cubs’ most valuable player was because this guy was brought in to be manager Lou Piniella’s second basemen before the 2007 season.  DeRosa said at the time he was looking forward to playing in Chicago and having one position to himself as opposed to being a utility player.

It was apparent that DeRosa would become an everyday utility player.  In 2007, DeRosa played 92 games at second base, 37 at third, 22 in right field, one in left field, one at first and one at shortstop.  In 2008, it was more of the same.  95 games at second, 38 in right, 27 in left, 22 at third, and one each at first and short.  While the Cubs offense wilted in back to back sweeps in the Divisional round of the playoffs, DeRosa hit a steady .333 in each series.

For some reason, general manager Jim Hendry felt DeRosa and his ability to play six positions wasn’t needed and he dealt him to Cleveland to free up money to pick up Milton Bradley because the Cubs needed a left handed bat since they wasted $44 million on Kosuke Fukodome.

The Cubs got three minor league pitchers in return, an outfielder in Bradley who is dealing with leg problems and hitting under .240 and the need for utility player that they went out and signed struggling Ryan Freel who just came off the DL.  Oh yeah, and remember the Cubs really stuck it to the Cardinals when they stole Aaron Miles away.  He was supposed to be the guy who replaced DeRosa’s versatility.

Now, Cleveland is behind the Royals (to show you how bad their season is) and now the Indians needed to get rid of DeRosa’s salary.  That’s when Cardinals GM John Mozeliak stepped in and snatched DeRosa away not only from Cleveland, but from the Cubs.

Fans have been openly begging for the Cubs to re-acquire DeRo.  Instead, it looks as though the Cardinals are making the moves to make a run at post-season.  I’m still not sure the Cardinals have the starting pitching, but this answers a big hole in the Cardinals lineup.  DeRosa will be good for a .280 season at the plate.  When Khalil Green goes back on the DL (as early as today) for anxiety disorder, DeRosa can slide over there.  When Troy Glaus comes back, he can move out to left field which will bring a substantial upgrade in defense over Chris Duncan.

Time will tell if the Cardinals have the horses to stay on top of the division, but this is a great move in the right direction.