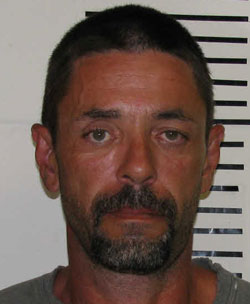 A nephew of a Cole Camp couple found murdered in their home with their granddaughter has been arrested and charged with three counts of first-degree murder.  The Highway P:atrol says he is Robert B. Blurton of Garnett, Kansas. He is being held on a three-million dollar bond in Kansas.

He is charged with murdering Donnie and Sharon Luetjen and their granddaughter, Taron, who was living with them three weeks ago.

A Highway Patrol spokesman says robbery is the apparent motive behind the killings although he would not says what was stolen. Sheriff Charles Heiss of Johnson County, Mo., says DNA evidence and a cell phone call from the Luetjen home led authorities to arrest Blurton. Heiss has led the Rural Missouri Major Case Squad’s investigation of the killings.