Governor Nixon has signed the state’s $23 billion budget that goes into effect next week, using the line-item veto to cut $105 million in state spending. The governor also is withholding $325 million until state revenue improves.

Nixon met with the Capitol Press Corps this morning after signing the budget bills. 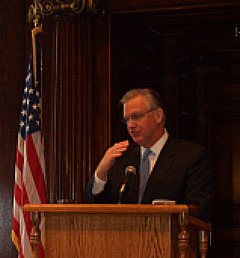 "These fiscally responsible steps are necessary to ensure that Missourians have a government we can afford without raising taxes and without sacrificing our shared priorities of education, healthcare and jobs," Nixon stated.

Among the vetoes were $24.7 million for the statewide interoperability communication system (though the remaining $87 million was signed into law), $16.5 million appropriated to pay for projects originally to be funded through the sale of Missouri Higher Education Loan Authority assets, $12.6 million in ethanol incentives scheduled for after Fiscal Year 2011, and $10 million for an interchange in Jefferson City to ease access to the old Missouri State Penitentiary site.

The governor is withholding another $91.3 million for MOHELA projects, $60 million for salaries, expenses, contracts and grants, $50 million for the Missouri Job Creation Fund and $47.8 million for repair and maintenance of state buildings.

Under the governor’s action, 1,400 positions in state government will be cut.

The governor did not cut education funding, stating that there is a consensus in state government that public schools are the state’s top priority and should not suffer budget cuts.

Previous Post: « Mavericks? What is that about?
Next Post: Show Me State Games extends deadline for some sports »