State Treasurer Clint Zweifel is proposing new standards of conduct for the Missouri Housing Development Commission in light of revelations that the FBI has been talking with the commission’s executive director.

Zweifel became chairman of the commission last month. He says his first order of 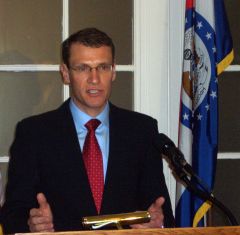 business is to push to strengthen the ethics that commission members must follow. Zweifel says the steps will remove conflicts of interest and build trust in the agency.

Missouri Housing Development Commission Executive Director Pete Ramsel has disclosed that the FBI interviewed him a year ago about the operations of the commission. Ramsel has said he knows an investigation is going on, though he added that the FBI has asked that he keep the information about the investigation confidential. Ramsel said he went public only because Zweifel had gone public with the information.

The agency awards developers millions of dollars in tax credits each year to create housing for the poor and elderly.

The Columbia News Tribune reported two years ago that Columbia developer Jeff Smith bought a piece of property in Wentzville from commission member Bill Luetkenhaus for $1.7 million. Luetkenhaus had paid only $932,000 for the property two months earlier. Luetkenhaus, who has since resigned from the commission, defended the transaction, stating that it was more publicly transparent that those of other commission members.