America’s military faces threats beyond Iraq and Afghanistan with attendees at the Current Strategy Forum in Newport, Rhode Island attempting to envision what might threaten national security in the future. 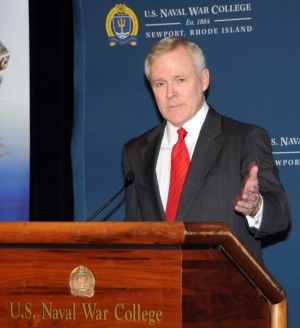 number of experts on the challenges the military faces. Secretary of the Navy, Raymond Mabus, says the odds are that over the next two decades America will face threats and challenges which we cannot see today. Mabus says this is a crucial time in which the country faces unprecedented challenges, just as it has in the past.

"No matter what time you drop down in history, you’re challenges are going to be unprecedented," Mabus tells the Missourinet. "Today, the complexities are there and it may be more complex because things move faster."

Iraq and Afghanistan occupy military thinking today. The Navy has 25,000 Marines in both Iraq and Afghanistan and even 14,000 Navy personnel on the ground in the Middle East. Ships are deployed around the globe. Even with those active military campaigns, threats loom as North Korea and Iran test nuclear weapons, pirates board and take over commercial vessels off the African coast and unstable regimes seem on the verge of toppling too many countries.

It’s tempting to think the forum convenes at a time unlike any other.

"You know, if you were at the (Naval) War College in January of 1942, you would have thought that was unprecedented, too." Mabus says, "And it was."

Nearly 900 people along with students of the Naval War College conclude the Current Strategy Forum today.

NEWPORT, R.I. – Secretary of the Navy, the Honorable Ray Mabus, addresses nearly 1,100 participants at the U.S. Naval War College’s Current Strategy Forum (CSF) in a kick-off address, on June 16. Hosted annually by the Secretary of the Navy, the two-day conference presents the perspective of the nation’s leading experts on how the Navy can both meet future challenges and identify opportunities to promote a more stable world with the theme, "Seizing Strategic Opportunities: Challenging the Paradigm."