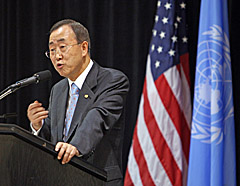 The visit was part of the U.N. chief’s plan to visit various parts of the United States to promote the organization. In his comments at St. Louis University, Ban spoke of the importance of Missouri in the production of America’s food supply.

Among those on hand for Ban’s comments was Governor Nixon, who told the crowd of the importance of agriculture to Missouri and reminded those in attendance of the state’s $2 Billion in agricultural exports.